Run While you can...

While Government is legally stealing your savings, Barbarians are making your life HELL! 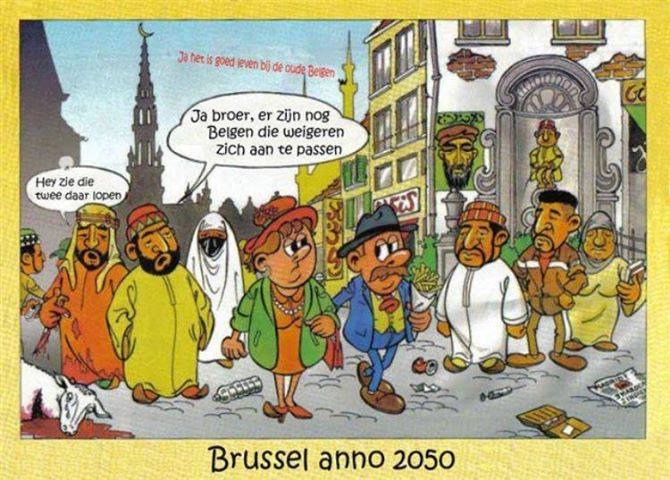 There was a time when Belgium was at Europe's vanguard. It was the second country in the world to industrialize, the founder of art deco and surrealism, and a producer of Nobel scientists who discovered -- among other things -- the God particle. Thanks to Leopold I (railroads) and Leopold II (Congo) Belgium became one of the richest countries in the world.

Although Islamic State has claimed responsibility for Tuesday's terrorist attacks in Brussels, they were also symptoms of a profoundly Belgian failure. The institutions of a well-policed and efficiently governed state have been evaporating for decades. Belgian institutions were left hollowed out, impotent to address the strains of immigration and incompetent to penetrate a rising extremist threat.

For election cycle after election cycle, politicians squandered the wealth of the state to buy their way back to power. Investment became superfluous, vote-buying and social spending the priority. Belgian voters, who allowed this state of affairs to persist, also share some of the blame.

Belgium's political parties divided public sector employment between them. To be a journalist in the public television station, one needs to have a political party affiliation. The same goes for even minor jobs at the municipal level. Political connections, rather than merit or hard work determined advancement.

This did become chronic after the single currency’s launch in 1999 and the unelected Brussels bureaucrats became a bigger influence thereafter. The trend of deterioration described in the article above has been repeated in too many other EU countries.

We are living THE END of Belgium and Western Europe and the invasion and proliferation by the Muslim society is the very proof of it. Belgium and West Europe is sliding into a 100 year (3 generation) dark economic and social depression. Even our grand children won't see it improve. Over the coming years Government will legally continue to take away your assets and the Barbarians your wife and daughters.

Those who decide to stay in Belgium because they think they are too old and/or have not the guts to make the step will see how their loved ones, children and grand children will slide into poverty and how getting from point A to point B gets increasingly DANGEROUS....What they still tend to call "Quality of life" will be replaced by what Donald Trump calls HELL!

There is a cycle in the life of all nations, and Jean-Michael Paul’s assessment which is part of this statement is shocking and real.

A second Permanent Residency is like a LIFE INSURANCE for yourself and your loved ones....and will open an important EXIT DOOR once life in Belgium, The Netherlands and the EU becomes dangerous and the economy goes down the drain. Don't for a split second think other countries will welcome you like the EU welcomes the Fugitives. Only EU-authorities are so STUPID!...Sie haben Es geschafft!

Note: a second residency also allows you to store part of your assets out of political reach.

THIS VIDEO YOU MUST SEE!

Only by investing in Gold & Silver and keeping it OUT OF POLITICAL REACH in a NON-BANK-VAULT will be safe!

In love with CRYPTOS!? READ Extraordinary Popular Delusions and the Madness of Crowds...Charles Mackay [not for sen… https://t.co/iDIeT7jVxZ

The odds are that the Financial Fallout of COVID will probably terminate Bitcoin & most Cryptos. Musk surely knows what he is doing.

Don't forget to check the Goldonomic site(s) for our latest TARGETS for $-Gold & €-Gold!