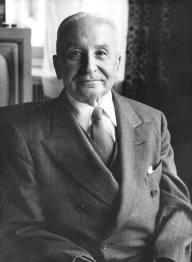 Ludwig von Mises was born on September 29, 1881, in the city of Lemberg, Austria-Hungary, (now Lviv, Ukraine), to Jewish parents Arthur Edler von Mises and Adele von Mises (née Landau). Arthur was stationed there as a construction engineer with Czernowitz railroad company. Mises had two younger brothers: physicist Richard von Mises, and later Karl von Mises, who died in infancy from scarlet fever. When Ludwig and Richard were small children, his family moved back to their ancestral home of Vienna.

In 1900, he attended the University of Vienna, becoming influenced by the works of Carl Menger. Mises' father died in 1903, and in 1906 he was awarded his doctorate.

In the years from 1904 to 1914, Mises attended lectures given by the prominent Austrian economist Eugen von Boehm-Bawerk. Mises taught as a Privatdozent at the Vienna University in the years from 1913 to 1934, while also serving as a principal economic adviser to the Austrian government during the Austrofascist regime of Engelbert Dollfuss.

To avoid the influence of Nazis in his Austrian homeland, and fearing repression due to his Jewish ancestry[1], in 1934 Mises left for Geneva, Switzerland, where he was a professor at the Graduate Institute of International Studies until 1940. In 1940, he emigrated to New York City. He was a visiting professor at New York University from 1945 until he retired in 1969, though he was not salaried by the university. Instead, he earned his living from funding by businessmen such as Lawrence Fertig. For part of this period, Mises worked on currency issues for the Pan-Europa movement led by a fellow NYU faculty member and Austrian exile, Richard Coudenhove-Kalergi.[2] He received an honorary doctorate from Grove City College.

Despite his growing fame, Mises listed himself plainly in the New York phone directory and he welcomed students freely to his home.[citation needed] Mises died at the age of 92 at St Vincent's hospital in New York.

Contributions to the field of economics

Mises wrote and lectured extensively on behalf of classical liberalism and is seen as one of the leaders of the Austrian School of economics.[citation needed] In his treatise on economics, Human Action, Mises introduced praxeology as the conceptual foundation of the science of human action, establishing economic laws of apodictic certainty rejecting positivism and material causality. Many of his works, including Human Action, were on two related economic themes:

2. the differences between government-controlled economies and free trade.

Mises argued that money is demanded for its usefulness in purchasing other goods, rather than for its own sake and that any significant credit expansion causes business cycles. His other notable contribution was his argument that socialism must fail economically because of the economic calculation problem — the impossibility of a socialist government being able to make the economic calculations required to organize a complex economy. Mises projected that without a market economy there would be no functional price system, which he held essential for achieving a rational allocation of capital goods to their most productive uses. Socialism would fail as demand cannot be known without prices, according to Von Mises. Mises' criticism of socialist paths of economic development is well-known.

The only certain fact about Russian affairs under the Soviet regime with regard to which all people agree is: that the standard of living of the Russian masses is much lower than that of the masses in the country which is universally considered as the paragon of capitalism, the United States of America. If we were to regard the Soviet regime as an experiment, we would have to say that the experiment has clearly demonstrated the superiority of capitalism and the inferiority of socialism.[3]

These arguments were elaborated on by subsequent Austrian economists such as Hayek.

The usual terminology of political language is stupid. What is 'left' and what is 'right'? Why should Hitler be 'right' and Stalin, his temporary friend, be 'left'? Who is 'reactionary' and who is 'progressive'? A reaction against an unwise policy is not to be condemned. And progress towards chaos is not to be commended. Nothing should find acceptance just because it is new, radical, and fashionable. 'Orthodoxy' is not evil if the doctrine on which the 'orthodox' stand is sound. Who is anti-labor, those who want to lower labor to the Russian level, or those who want for labor the capitalistic standard of the United States? Who is 'nationalist,' those who want to bring their nation under the heel of the Nazis, or those who want to preserve its independence?