Don't value your savings in Fiat Money Paper but in Real Money! 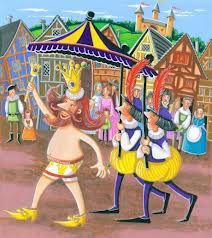 Remember it is absolutely incorrect and even extremely dangerous to value your savings in (worthless) FIAT MONEY!

It is NOT the price of Gold which goes up like it is not the price of Gold(shares) which is coming down but (whether or not we have manipulation) a change in the perception of WORTHLESS FIAT money. Hard to understand as we have all been brainwashed and still are....

When you are running a pure fiat currency system, confidence is the only thing you have to keep things together.... And if confidence in paper and bond markets is lost, then this is going to turn into a total debacle. They are doing QE all over the world (especially in the USA, the EU, England and Japan) and the central planners won't be able to maintain confidence for much longer.

The upside trends for Gold and Silver and miners are totally intact and, because of the 19 month consolidation, the upside is greatly improved: the larger the consolidation, the bigger the subsequent move.  Those who were patient are about to be rewarded: there is going to be an upward parabola in gold and silver that will only accelerate over time. As a matter of fact, we don't have ONE BOTTOM for Gold but FOUR distinct ones. The 2008-09 correction was V-shaped , the 2011-1013 correction however is one requesting endurance, patience and therefore KNOWLEDGE. 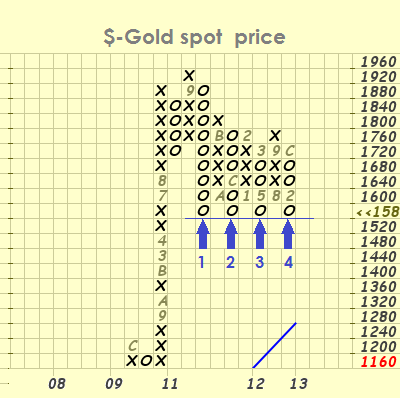 Soon the Mainstream media will start to call the Recession a Depression, debt (fiat money) will continue to rise and Interest rates will bounce off the manipulated ZERO level or (for countries like Spain and Greece) will reach new records. The dangerous 6% level is slowly but surely coming down. For Japan (country I see as the canary in the mine shaft) the level has come down to 1%...Once the dangerous interest rate level is reached, Governments have no alternate but to start to monetize debt in an exponential way...the precursor of Hyper-inflationary Prices.

Not only do we have a problem of Fiat money and debt but also one of Derivatives or debt which is further levered by the derivatives, which are unfathomable in terms of scale and a financial atomic bomb few investors understand. This is why they have to keep creating more liquidity because as the derivatives go, the banking system goes with them...and Government gets into trouble not only because social unrest but also because their financiers are no more!  So we will continue to see increased liquidity, but it will have a minimal and an ever decreasing impact on the economies. Stock markets will start to behave differently once we have Hyperinflation (indicating confidence is lost in the paper markets) and people scramble to get out of Paper money (currencies, bonds, bank deposits) into Real Assets.

The bottom line is that the fundamentals for gold and silver are rock solid and manipulation will sooner or later stop working. Whatever is done on the paper markets in Europe and the USA (like 100% margin requirements or a CASH market for Gold and Silver) is used by others (mainly the East) to acquire more physical Gold and Silver. Just like during the 1960's the banks will end being the bag holders and Gold and Silver will Fly!

Once Gold and Silver fly, your next problem will be to avoid Legal Theft. Before and during the World Wars, most of the World's Gold was shipped to the USA because at that time this country was seen as a safe heaven. Today it is no more...but there are safe alternates.  These will come in very handy once Government, applauded by the Left Masses,  smells that they can tax your profits and take away your savings. This happened in Germany and Argentina and will happen again. Remember Philips Le Beau and the Knight Templar's.  [what will YOU do when it becomes impossible to sell Gold anonymously!?]

We have a paradigm shift. The better you understand the fundamentals and how technical analysis works (so you understand the Point and Figure charts) the easier it will be to navigate through this storm. Never forget that once the Herd sees The Emperor has no Clothes, it will be GAME OVER...and all Fiat Money will evaporate.

Have a GREAT day,