Why pay interest for something which is worth NOTHING !? 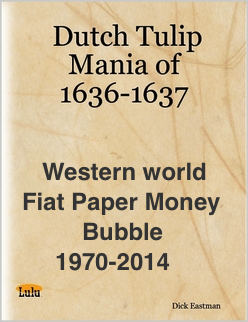 Everybody has to spend energy, has to work for his living. This is true for Government as well as for the Billionaires and for the ordinary employee. Nothing - except for Sunshine and Air - comes for free. Note that today, sometimes people even pay for sunshine (vacation) and Air (airports in Venezuela).

Not hard to understand that today's fairy tale of “Free Fiat Money” will have a bad ending...or is it? Few people seem to realize the dramatic situation we are in and that the denial is fed by the Propaganda sold by Politicians through the Mainstream media. The 4th generation (see Galbraith's Age of Uncertainty) doesn't seem to be mentally able to grasp the seriousness of the situation the world is in.

Governments and Central Banks (which are like economic Siamese twins) not only print Fiat Money but on top they make the cost to print more money, issue new debt and serve past debt ridiculously low....In reality, Real Interest rates (nominal interest rate less real inflation rate) or the cost to issue more fiat money has become negative. Propaganda must be extremely solid to keep such a mirage alive and absolute no accident may occur. 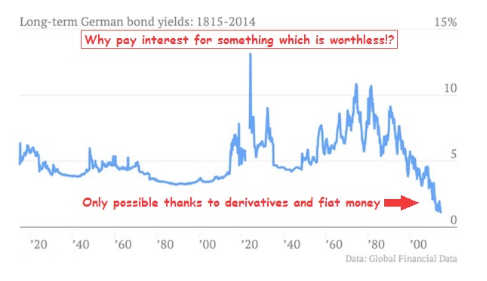 Note 1 : up to today we still don't know what really made the Big Crash of 1929 happen. Some blame the bad state of the economy, others the overextended on margin 'debt' thriving Stock Markets. Fact is we had a Debt bubble like we have today.

Note 2: Bond markets show Huge Top formations and we already have indications that the price has fallen down out of the top. 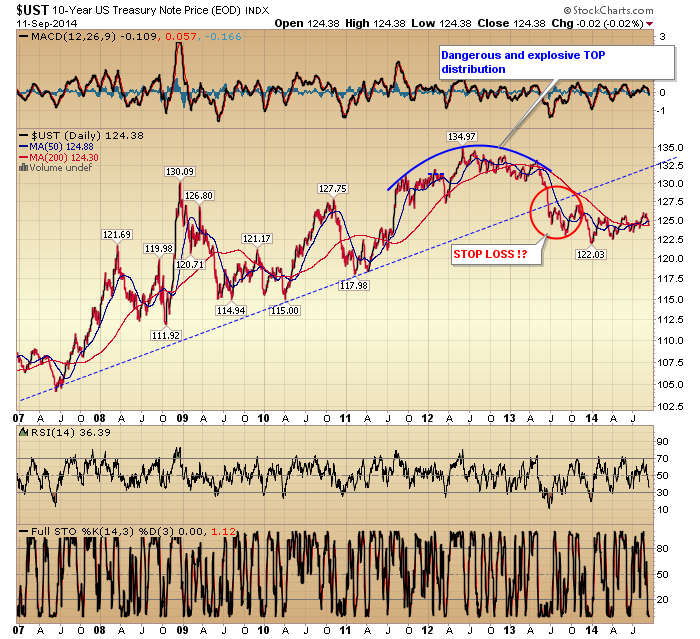 Governments are using the so created Fiat Debt Money to pay for Goods and Services. The are getting richer for each Dollar/Euro/Yen/Sterling note they bring into circulation. (reality is that they get less broke for it is mathematically impossible to cover all the historic and future debt). Those who understand what is happening, know that as sellers they have become subjects of theft in broad daylight. Governments are paying for Goods and services with 'negative fiat money' or to put it blunt, the buyer is exchanging his goods and is getting more debt than Assets in return.

By doing so, Authorities deny the very existence of the Constitution.

Forecast economic evolutions and financial markets is a rather easy exercise  compared to Timing when these will unfold. TIMING when something will happen is extremely difficult. Technically speaking, bottom and top formations can be short but sometimes take years to mature. 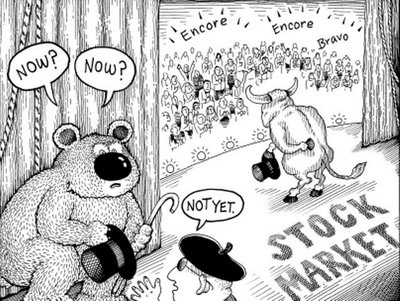 Easy to forecast the Target based on the size of the formation. Hard to forecast when the price will break out of the bottom (Gold & Silver) or down of a top (Bonds, Money). Experience teaches us that price can break out once we have completed ¾ to 4/5th of a pattern. And ¾ to 5/5th we have for Bonds and Gold/Silver. The respective formations started in 2010/11 and are still maturing and it can take another 12 to 18 months before we see more action.

Because the many warnings issued by Financial analysts fail to become reality in the short/medium term, people which want Immediate satisfaction rather believe the Propaganda sold by the Authorities through the Mainstream Media's and are becoming dangerously Complacent. Also Authorities are seen as almighty and the Herd becomes convinced they will come up with a decent solution....that is until we actually have a catharsis and/or a war.

Note: there are more and more indications pointing to the fact that WW III will be fought in the Middle-East but also in EUROPE!

The future for the West will be very bleak if our central planners continue to play games by manipulating major markets and selling lies through the mainstream media. Some day the can will hit the wall and it will be Game Over. Unless off course you are prepared.

Price goes up or comes down when Time is up and nobody believes it will. 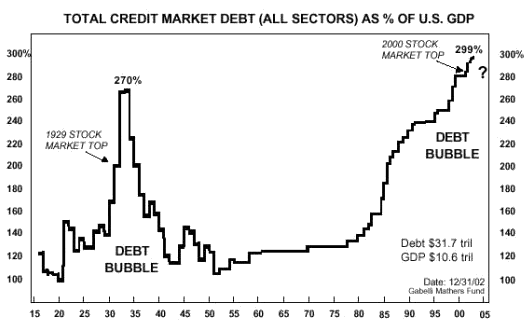 In the mean time, many who are invested in Gold & Silver are unhappy and some start to doubt whether they made the right decision, disbelief is growing and some investors/traders start to liquidate or have liquidated their positions...The sector is being purified and is preparing for the next dramatic Bull run which will happen at some time in the near future.

The special ratio PF charts in the subscriber's sections clearly show the latest configuration for Gold expressed in the major currencies - as well for the Miners - . The only thing we can't predict at this time is WHEN it will happen.