Not a single analyst who mentions the bullish Head & Shoulder pattern

Not a single analyst mentioning the Reversed Head and Shoulders patterns we have for many stock market indexes and a lot of equities. Analysts are so biased they only see Negative chart formations and forget markets ALWAYS climb a wall of worry.

Over the past months Authorities have flooded the financial markets with trillions of freshly created fiat money. Whatever is said, Communicating financial vessels play a major role in today's financial markets and under these conditions a Dow Jones of 30,000 and higher is very plausible.  Zimbabwe is a modern example of the potential many stock market indexes have. During the hyperinflation cycle, the Zim stock market index literally exploded in the hundred thousands. The bad part however is that these dramatic upswings are positive only when expressed in Nominal Terms or in Fiat Money. In other words, the rise is and will be the result of inflation and in particular of hyperinflation. Expressed in Real Money or barbaric Gold, the end result is negative.

Not only have financial markets been flooded with fresh fiat money but today Fund managers sit with another huge dilemma. The liquidities they have acquired during the last months of 2008 and the 1st Quarter of 2009 are still idling on the sidelines and in most cases the managers have no option but to reinvest these before year end.

As we have real negative interest rates. Cash and Money market funds yield zero to negative. Bonds are over their parabolic top and are down by 10% since the beginning of this year. Looking at the artificially low interest rates, one had to be an idiot to buy any. The Real Estate markets are clearly in a long term bear market and Commercial real estate has joined the slide by loosing 35% since its top in 2007. Add to this a negative business climate where stocks are liquidated for cash because entrepreneurs fear what is coming and it becomes easy to understand that even under deteriorating business conditions communicating financial vessels may well end up pushing up stock markets to unrealistic high levels.

Theoretically a head and Shoulders pattern is a REVERSAL pattern (exceptions occur). The formation is only completed once the neckline is broken and tested. The Dow Jones Industrial Index has to break through the 9,000 and test this level before the reversal is confirmed. [Important is that an aborted HS pattern will dramatically swing in the opposite direction]. Assuming the index breaks the neckline [we think it will], the objective of the Head and Shoulder pattern is 12,500. If it fails, we’ll slide back to 6,500. 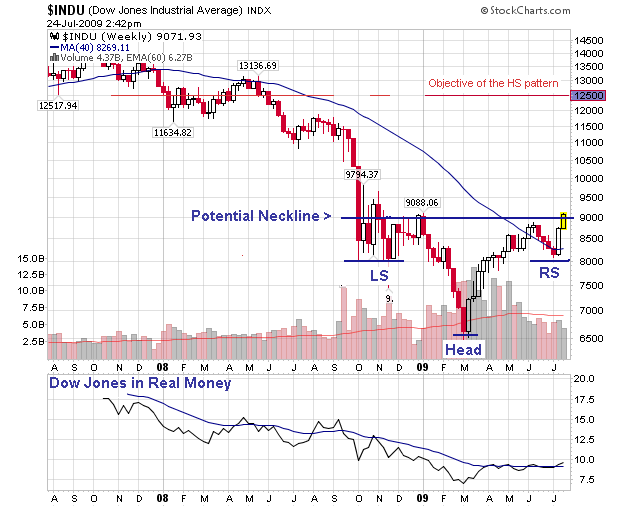 Today Short term indicators are overbought. But we have bullish cross-over of the 50 and 200 day Moving Averages of a bunch of stock markets and stocks. Bullish cross-overs are reliable technical indicators and they will certainly help markets to climb their walls of worry.

The Dow Jones made a bottom in March of this year with a volume which was almost double of the volume of the 2002-03 bottoms. Add a false down break which could end up as a huge bear trap and we have another confirmation of a potential reversal instead of yet another huge down leg as many analysts predict.

Having said this, if the Dow Jones breaks and tests the 9,000 level we have a technical reversal which could take the Index to historic levels in nominal terms. During this upleg, we expect Gold and Silver shares to lead the market together with Oil and Gas stocks. The implications of this reasoning is that Gold, Silver, Oil and the mines and Oil shares will probably rise in a dramatic way in order to make up for the (Hyper)inflation and nominal rising stock markets. 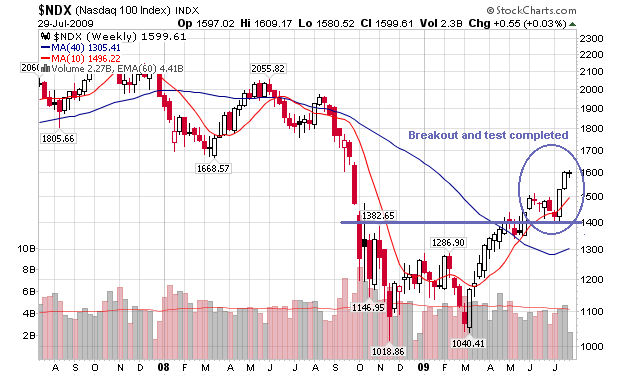