READY FOR THE LAST ACT 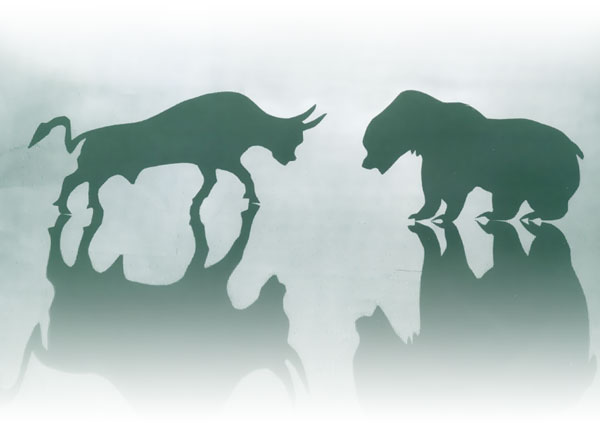 All seems to be ready for the last act

Over the last months the markets have been behaving in an erratic, illogical and volatile way. And yet, as the puzzle falls into place it looks like what we saw was the back stage people preparing the setup for what could be a ‘Huge slide’ and maybe the play (crash) of the century that is to be printed in the history books of our grand-children.

The CDO subprime is about to leave the eye of the storm shortly and start its second act as the backstage actors are impatient to join the play: Credit swaps, Credit card debt, Student loans,…

The Dollar runs a current account deficit of more than $ 800 bn per year. Unseen in history! The budget deficit is + $ 400 bn. Even cooked there is not a single American statistic that looks decent.

The Dollar Index is running into the Mother of all Necklines which is part of the mother of all Head and Shoulder formations. Technically, it is extremely overbought and the net short position of Commercials is at a historically high level. The Elliott Wave specialists will probably soon call the end of the ABC correction/wave 4 and the start of a huge parabolic run away 5th down wave.

Just like in 1921 with the German Mark*, the Dollar is giving the impression that “All is well Mme la Marquise”. Brainless Media are talking the public back into the Dollar. All problems are behind us and the Dollar will once again shine as it has never before.

* In 1921 it only took 6 months before the investors realized the huge mistake they made and to massively start selling Marks. The German currency crashed until 1929 where it was replaced by the Reichsmark.

The American bond market has run up to a point which is extremely close to the upper resistance line of the Top/Distribution pattern. Off course, technically, Bonds are also overbought.

Commodities are flashing the economy could fall into a Deflation cycle. Commodities and Oil have – since this summer – been coming down in a crash mode. Gold and Silverare seeing a sharp correction: Silver lost half of its value and Gold about 25%.

Physical Gold and Silver are in short supply as demand is strongly up as a result of the push on paper Gold and Silver this summer. In Europe, Deutsche bank has stopped trading Kruger Rands because of the present shortage. Technically both have fallen into historically high OVERSOLD positions. Commercial Gold traders are (they know better) sitting with an extremely low position of Short contracts. Elliott wave specialists will probably call the end of the ABC wave 4 correction and the start of a huge run up of Gold in its 5th parabolic wave.

As expected Talking heads are incorrectly calling for the end of the Gold and Silver bubble, the Investor sentiment has become extremely negative and more and more investors start to short gold now. What the authorities planned is happening.

Western world stock markets all show huge double tops, secular Bear Market Trends and have or are falling out of a rising Flag/Wedge. As they do, they will at a certain point start their Second and strongest down wave. Remember, October has a very bad reputation!

At this point, the scenario starts to become clear.

As selling pressure increases on the Dollar and/or the Stock market, both reverse course. Investors start to see the huge mistake they made by buying Dollars and Stocks over the last months and start to liquidate their positions. The pressure increases on the Dollar and Utilities and Bonds also start to fall. As the Fed sits between a rock and a hard plate, it has little or no room to increase interests in order to protect the Dollar. So, in order to keep the financial system alive and the economy liquid, it massively starts to monetize the debt (they buy all T-bonds and notes). Because of hyperinflation, interest rates start to rise to levels never seen before.

At the same time, Gold & Silver and some commodities (Oil) sharply reverse course. Banks and financials continue to go bankrupt…