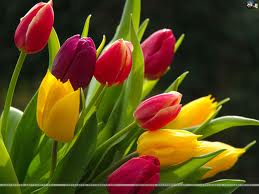 Extraordinary Popular Delusions and the Madness of Crowds...

The first tulip in Europe was seen in Augsburg, in Germany, in 1559, and was imported from Constantinople -Turkey, where it had long been a favorite. Ten or eleven years after this the plant was in great demand in Holland and Germany. Wealthy burghers of Amsterdam sent directly to Constantinople for their precious bulbs and paid extravagant prices for them.

The first roots planted in England were brought from Vienna in the year 1600 and were considered a great rarity. For thirty years tulips continued to grow in reputation. One would suppose there must have been some virtue in this flower that made it so valuable in the eyes of so prudent a people as the Dutch. Yet it has neither the beauty or the perfume of the violet nor the fragrance of the rose. It hardly possesses the beauty of the humble sweet pea. Its only recommendation is its aristocratic stateliness, and this should hardly have commended it to the only democratic republic on the globe. But it is by no means the first time that fashion has turned ugliness into beauty and rarity in wealth.

In 1634 the rage for tulips among the Dutch was so great that the ordinary industry of the country was neglected, and the whole people turned to the production of tulips. As this mania increased, prices increased with it, until in 1635 merchants were known to have spent $40,000 on the purchase of forty tulips. At this time each species was sold by weight. A tulip of the kind known as the Admiral Lietkin, and weighing 400 grains, would sell for $1,800; Admiral Von der Eycke, weighing 450 grains was worth $500; a Viceroy of 400 grains would bring $1200. Most precious of all, a Semper Augustus, weighing only 200 grains, was thought to be cheap at $2200. This last species was much sought after, and even an inferior plant would readily sell for $800. When this species was first known, in 1636, there were only two roots of it in Holland and those were not of the best. One belonged to a dealer in Amsterdam, and the other was owned in Haarlem.

So anxious were the purchasers for this new variety that one person offered twelve acres of valuable building land for the Haarlem tulip. That of Amsterdam was sold for $1840, a new carriage, two gray horses, and a complete suit of harness. As a specimen of the value of these bulbs, we give the actual copy of a bill of sale of certain articles given in exchange for one single root of the Viceroy species. Since that day tulips have declined in value, but wine, butter, and cheese have decidedly advanced.


© - All Rights Reserved - The contents of this report may NOT be copied, reproduced, or distributed without the explicit written consent of Goldonomic.