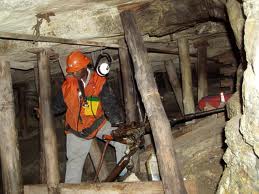 Mining in South Africa: Anglogold closes Gold mine and sends miners home ! ...other mining companies close down the mines....The fact that mines are closed and miners are send home most of the time signals the end of the conflict. As a rule BEFORE Nelson Mandela was elected (1990's)  it happened often that  Gold Mine management FIRED all employees and replaced the work force with new and or returning workers. Returning home means that they loose all these priviledges  and their living conditions change (decrease) drastically.

SA-Miners are a privileged group and they receive free housing, food, free education and free medical help for the whole family. Miners receive a token each time they go working in the mine. Because communication is so important in a dangerous mining environment and because there are about 28 dialects in South Africa newcomers had to learn FANAGALO (Chilapalapa in Zimbabwe) or the UNIVERSAL miners' language before they even were admitted to descent in a mine.

Gold, how it's made:

Gold Fields Ltd. (GFI) fired 8,500 workers at a South African mine operated by the fourth-biggest producer of the metal after they failed to heed an ultimatum to abandon a strike and employers, and unions sought to reach a deal on pay. Workers dismissed from the KDC East mine may appeal, Willie Jacobsz, a spokesman for Gold Fields, said today by phone.

A spate of strikes that began in the platinum industry and spread to gold, chrome and iron-ore operations have hurt South African companies already grappling with rising costs and helped push up international prices for precious metals. Workers have walked out without heeding unions or laws on resolving disputes, prompting producers to issue threats to dismiss employees.

AngloGold Ashanti Ltd. (ANG), the biggest African producer of the metal, has issued a "final call" for all striking workers to return to their duties by midday tomorrow. Those who don't will be fired, the company said yesterday in a statement. AngloGold, which gets about a third of its production from South Africa, shut all of its sites in the country last month. The company and its peers improved a wage offer last week after unauthorized stoppages led to about a 40 percent drop in the nation's gold operations, hurting Africa's biggest economy. Strikes at AngloGold have entered their fifth week, with the company losing about 32,000 ounces a week, Chief Executive Officer Mark Cutifani said on a call with investors yesterday. Before the unrest, the company had expected to reduce the size of some mines within five years as resources were depleted, according to the CEO, who said that "areas that were marginal in the first place will be under extra scrutiny."