The sector clearly shows a negative mood for Gold and Silver, and stocks have been moving down in a leveraged way compared to Gold and Silver. Quality mining shares are dramatically undervalued. The value is exceptional, so I think it will have a slingshot effect when gold and silver recover and investors gain some confidence. The upside impact on the price of the shares will be something to behold. Expect at least a 600% increase in the HUI index.

On fundamental values, gold and silver shares trade at historic low valuations as in 2008 when you were able to buy companies:

Lower your costs and enlarge your positions during corrections (NOW) in the Gold sector. The long-term uptrend has been confirmed, and we expect a bull run to last for more months. Expect shares to suffer somewhat during Stock Market Bear Runs! Next month we expect better results with increased dividends and higher earnings. The Hedge funds had their way with the gold shares, but logically this is ending. When you can buy companies whose resources are three times the company’s capitalization, the share is getting unreasonably cheap. It is very well plausible that Hedge fund managers use any negative news in the sector to play their little shorting game.

We prefer the Juniors to ETFs, Futures, Options, and Turbos. The other advantage Juniors have, is that the Seniors will take them over as their gold ore reserves decrease. NEVER forget that by holding DERIVATIVES, you are using UNCONTROLLED and UNREGULATED investment instruments (which are mostly manipulated)

The most significant profits will be generated by Majors and Juniors, which have been incorrectly sold "en masse" by the stupid Herd (incl. Hedge funds)

Table with low-risk step-in levels and potential objectives: (Eldorado Gold is also listed under Gold & Silver juniors) When selecting a stock, preference is given to those where the price sits on 200 days Moving Average and/or price sits on the bottom of the the uptrend channel (blue line) note: Table and Objectives have been updated - Objectives are short/medium term - use trailing stops once the target has been reached!

We initially advised buying this stock at 75 cents...The potential objective is +1,015%...cheap again!. Durban Roodepoort runs the deepest Goldmines in the World...but lately, its behavior has been rather sloppy! Having said this, the stock is still cheap. Although South Africa has been managed differently since Mandela took over, the MAIN source of income is Mining, AND the white Anglo-Saxons have trained all black businesspeople.

With mining assets in South Africa, the company runs operations from exploration through to smelting. Shares are trading at $4.23 at the time of writing, toward the bottom end of their 52-week trading range of $3.96 to $6.23. The company is capitalized at $162.80 million at the current market price. Earnings per share for the last fiscal year were $1.21, placing the shares on a price-to-earnings ratio of 3.49. It paid a dividend of $0.06 last year (a yield of 1.40%) which was covered over 20 times by its earnings. It has the lowest price-to-earnings ratio of gold mining stocks.

This video clip is about Kinross mining in Mauritania:

November 2008 - Gold shares see the most significant jump in years. This is how fast Gold and Silver shares can go up...

Returns on Gold mines are swift and often not expected...a BULL RUN we have! 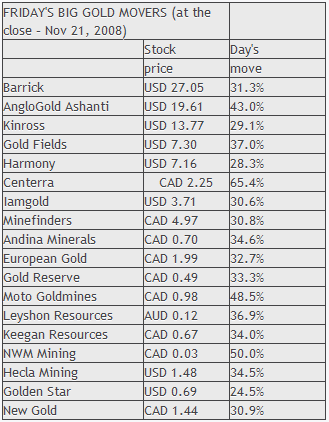 Gold mines suffer somewhat because the trading business is redirected toward Gold and Silver ETFs.

Nov. 6 : Gold, silver soar in a most unusual fashion

This is what an intermediary bottom looks like in the media