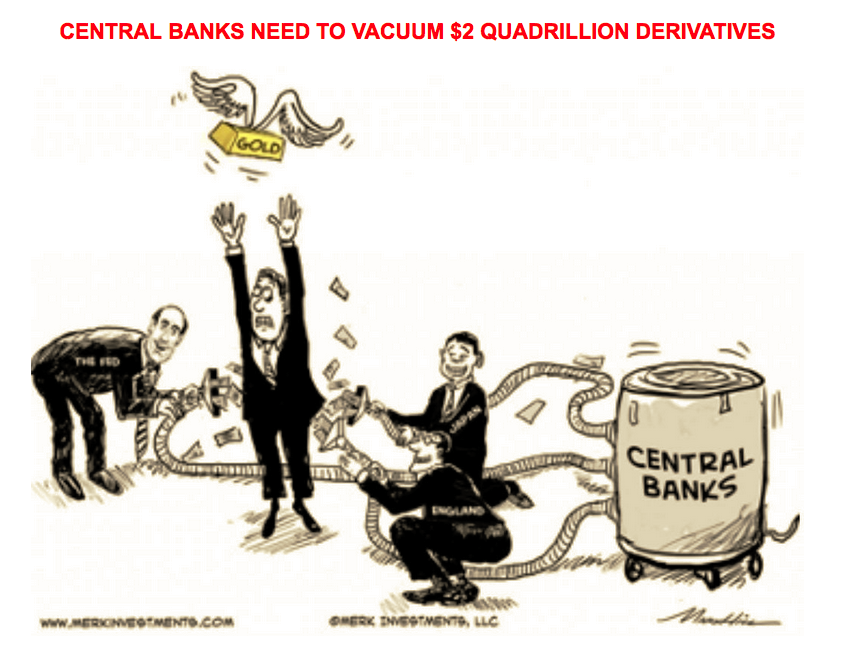 When the Russians invaded Ukraine and gas prices went 10 to 20 times over, suddenly, several energy companies needed a bailout.  They had hedged energy prices through derivatives and collectively had to come up with 1,500 billion euros in additional guarantees to honor those contracts.

Once again, governments had to intervene and support energy companies through loans, guarantees, or even nationalizations. Germany became a forced owner of Uniper and has already allocated 60 billion euros to the company.

Always those damned derivatives bringing us to the brink. In 2008 we agreed that it was utterly ridiculous that banks could speculate on our savings, but in 2022 it's still happening. Even pension funds should get a bailout because they took outrageous risks with our pension funds.

That we have not yet seen the latter with derivatives is an easy prediction. And that losses in the derivatives market will also be covered with freshly printed currency.

The problems at British pension funds should give us an early warning.  Indeed, the largest derivatives market is interest rate derivatives. This market is $475,000 billion, according to the Bank for International Settlements. That is roughly six times the world's GDP.

It's a simple question, but the answer is anything but. I have been following this market intently for 15 years, and in that time, I have never found anyone to explain it to me.

Now that interest rates are rising everywhere, and maybe we will hear the answer after all. The losses in this market must have reached gigantic proportions by now, and these are bound to show up somewhere. M.V. - November 2022 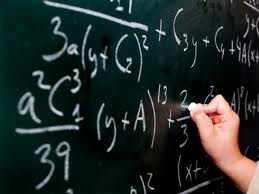 What is a derivative? it is a time bomb and an accident waiting to happen, a nuclear financial bomb that will destroy the financial system.

A financial instrument whose value is derived from an underlying asset. For example, the US paper dollar is a derivative. Its value was once derived from the gold, or silver (then lawful money) held at the US Treasury and/or gold and silver coins the US government had minted and placed in circulation. Decades ago, one could take a paper dollar to any bank and demand a coin of the precious metal in exchange.

The notional value of the derivative market is roughly $1.4 QUADRILLION and 144 trillion Dollars. Derivatives are "derived" from underlying assets (homes, debt, etc). A lot of smart people have tried to explain what these things are, but miss the forest for the trees. A derivative is NOT an asset. It's, in reality, nothing, just imaginary security of no value that banks trade as a kind of "gentleman's bet" on the value of future risk or securities.

Let's say you and I want to bet on whether our neighbor Joe will default on his mortgage. Is the bet an asset? Does it have any real value? Both counts register a definite "no." That's the equivalent of a derivative.

It is total and complete lunacy to claim these items are anything more than fiction (perpetuated by another fiction: that Wall Street is able to value these things or price them accurately). But thanks to Wall Street's lobbying power, they've become the centerpiece of the financial markets.

I realize that number sounds like something out of Loony tunes, so I'll try to put it into perspective. 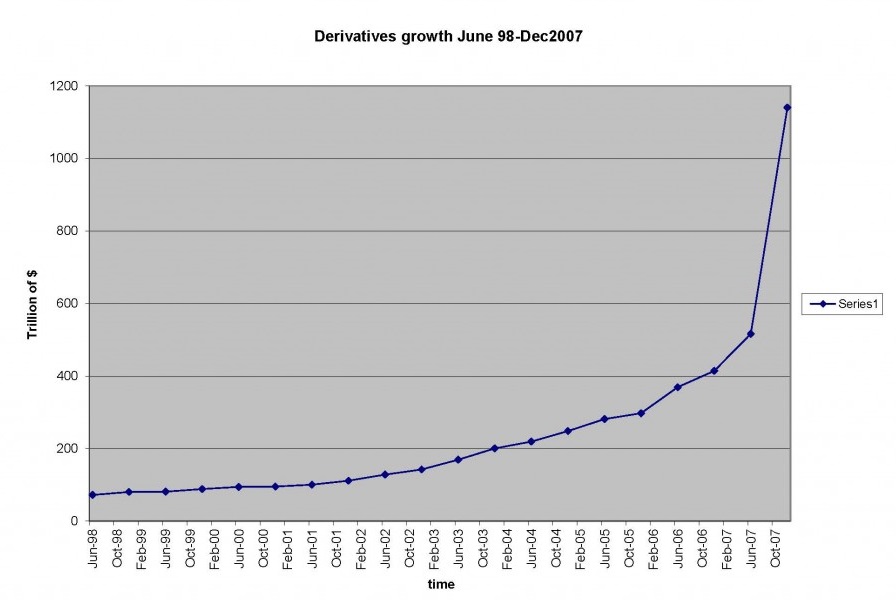 Keep in mind the notional value of the total amount of OTC derivatives outstanding reported by the BIS was reduced by 50% about two years ago when the BIS changed their computer basis for valuation by considering all derivatives as going to closure as value to maturity. The actual total value of all outstanding OTC derivatives that was then carried for two reporting periods on the books of the BIS is one quadrillion, one hundred and forty-four trillion US dollars notional value. This is a fact. The $700 trillion US dollars that is quoted now has not changed since it was manufactured by a change in the method of accounting for notional value by reducing the number by approximately 50%.

As early as 1998, soon to be the chairperson of the Commodity Futures Trading Commission (CFTC), Brooksley Born, approached Alan Greenspan, Bob Rubin, and Larry Summers (the three heads of economic policy) about derivatives. She said she thought derivatives should be reined in and regulated because they were getting too out of control. The response from Greenspan and the company was that if she pushed for regulation that the market would implode.

The most liberal estimate of the bailout costs ($24 trillion) is equal to less than 2% of the derivatives market and very dangerous is that the vast bulk of them (84%) are based on interest rates: this is why 'they' will sell their mother and father to keep the interest rates LOW and why by doing this 'they' will create hyperinflation which in turn will push up the interest rates and destroy the financial system.

The vast majority of derivative exposure involves only a small handful of institutions: JP Morgan, Goldman Sachs, Bank of America, Citibank, and HSBC.  JP Morgan is holding double the amount Goldman and Bank of America are holding. [An intelligent saver will for obvious reasons stay away from these financial institutions.]. If 4% of derivatives are "at-risk" and 10% of those bets go bad, you've wiped out ALL OF THESE BANKS' EQUITY and they go to ZERO.

We have unfortunately not seen the end of the cumulative credit losses.

OTC derivative problems are not going away. Rather than being under control, the problems have just started!

The biggest danger yet to come is $ 62 trillion Credit Swaps....!

The BIS (Bank of International Settlements) announced the biggest gain in derivatives ever since 1930. The total is approximately $ 1,144 Quadrillion. The notional value becomes real value when either counterparty to the OTC derivative goes bankrupt. The OTC derivative house cannot be allowed to go broke. This means that whatever funds are required to rescue failing international investment banks, banks and financial entities will be provided. Bearing in mind that monetary inflation precedes price inflation, there is little doubt we are about to see Hyperinflation...click here for more

After the crash of 1920, the legislators issued laws (Glass Steagall-act) forbidding banks to speculate on the Stock and Money markets. Ever since they have found a way around this. As a result, what we see today has become a lot WORSE.

Compared to the Credit Swaps, the Sub-prime looks like a walk in the park!