Fractional Reserve Banking is the Catalyst for the increase in Money supply (and Inflation).

Throughout history, no fiat money system has stood the test of time. All attempts to substitute paper money for gold and silver have ended in the total destruction and debasement of the currency and a collapse of the economy. Argentina and Zimbabwe are modern life examples.

Click on the picture left to listen to Economic Recessions, Banking Reform and the Future of Capitalism

While bankers do control the issuance of credit, they cannot control themselves. Bankers are the fatal flaw in their deviously opaque system that has substituted credit for money and debt for savings. The bankers have spread their credit-based system across the world by catering to basic human needs and ambition and greed; and while human needs can be satisfied, ambition and greed cannot - and the bankers' least of all. Aug 25, 2008 - Darryl Robert Schoon 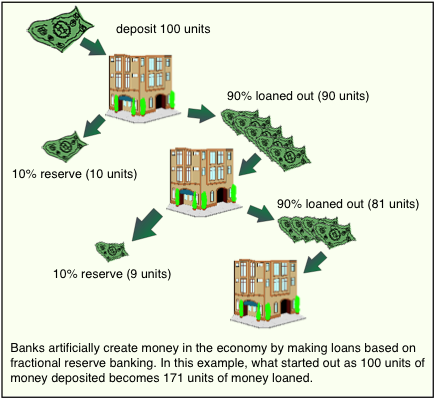 Those who don’t like reading can watch this light-hearted You-Tube video clip:

Each time bankers have been operating against the general moral principles, with a fractional reserve ratio, it brings about credit expansion, unbacked by real savings that lead to an artificial, inflationary economic boom, which finally reverts in a crisis and economic recession in which banks inexorably fail.

To have a better understanding of the mechanism, one first needs to understand the difference between Loan Contracts and Deposit Contracts.

In case of a Deposit contract, as funds are deposited within the banking system the depositor entrusts the bank to guard the funds and to return these to the depositor at any moment he should ask for it. The fundamental purpose of this contract is the safekeeping of the funds. Hence, for this service, it is possible that in some cases the depositor has to pay a fee for the custody. An example is a bank or a broker holding securities for a customer. For simple deposits of cash money, banks traditionally do not ask a fee but rather pay a small interest.

A deposit is also an irregular deposit. In other words, the bank has the obligation to always keep available to the depositor goods of the same quality and quantity as those received. The logic behind this is that the safekeeping obligation requires the continuous availability to the depositor of a 100 % cash reserve.

Important is that the availability of the goods cannot be transferred and a 100 % cash reserve has to be kept at all times. In other words, there is no fractional reserve banking possible.

In case of a Loan contract, funds are deposited within the banking system but can be lent out to a 3rd entity that has to return the initial deposit and has to pay interest as agreed between parties. In other words, in this case, the availability of the good is shifted from the lender to the borrower for the duration of the contract. (ex. Fiduciary deposits)

Today as $/€ 100 is deposited into the banking system and as there is practically no obligation to keep a 100 % of availability of the funds (Banks have come to a point where they operate with fresh funds lend to them by the Federal Reserve/National Banks), the cash reserve is close to *zero and even negative. Hence, the bankers’ fraudulent activity can be (as long as it is not discovered and banks do not fail) expanded exponentially. In other words, a bank deposit of $/€ 100 ends up as $/€ 999 of freshly created money. In fact, the present situation has even become worse since money has become “debt”.

Additionally, both kinds of money contracts (deposits and loans) are used in a similar way to increase the creation of fresh money. 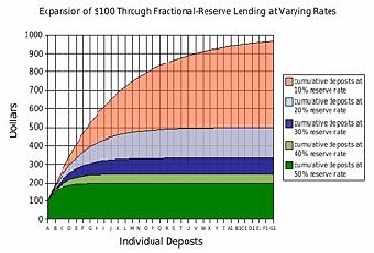 Federal/National banks or centralization is something that was already used (and failed) by the Egyptians. The process has always been the same. After a pronounced inflationary boom (hyperinflation) there was a confidence crisis, a drop in the value of money, and failure of banks. This pattern can be seen over and over again in Egypt, Greece and later in the Roman Empire. In those days, instead of printing more money, they simply debased the monetary system by taking more and more gold and/or silver out of the coins in circulation. Each recession lasted until the supply of cash and credit money approached its pre-crisis level.

Each time we have the creation of money/credit that is unbacked by real savings, entrepreneurs receive false signals, and the so created fresh money is misallocated. In other words, it is NOT used in those sectors of the economy where it is most needed. We see Bubbles. A modern example is the Real Estate sector compared to the food commodity sector. Although there was no real shortage of Real estate, and because interest rates stayed low for so long, a self-feeding price bubble was initiated. The price of real estate began to rise abnormally because of cheap credit and more and more funds were allocated to this sector. Other sectors, like Energy-Oil and food, became uninteresting. Oil refineries were not modernized and no new ones were built. Hence we not only see higher prices as a result of monetary inflation but also because of the equilibrium of supply and demand.

As life gets more and more expensive, more homeowners have to foreclosure and more builders go out of business. We have a Credit Crunch because credits were incorrectly allocated by the banks. Federal/National banks have to move in to avoid a run on the Banks (Northern Rock) which would inevitably bring down the whole system. This action liquefies the bad debt of the banking system as it is taken over in exchange for fresh money. By doing this, even more, monetary inflation is created. At the same time, because of the credit crunch, less and less credit is allocated and banks (Fortis) try to increase their capital in order to regain positive leverage on their own funds and deposits and in an effort to dilute the pain over a larger number of shareholders.

But the vicious circle has been closed. The banking system has ended between a rock and a hard plate. Either they stop creating money and interest rates will jump up today hereby pushing the economy into a depression, or more fiat money will be created ensuring we end up in a hyperinflation cycle. The coming hyperinflation will then result in a confidence crisis, high-interest rates and depression and destruction of the monetary system. This will last until the supply of cash and credit money approach its pre-crisis level. As a conclusion, we can say that interest rates are to increase in all cases!

In other words, as the Gold window was closed in 1971, the worst-case scenario is that we could see a Dow Jones level back as low as 1000! The bright side is that at that time the Dow Jones will still exist and that bank deposits may be whipped out. This is certainly a situation Zimbabweans understand.

History shows over and over again that any lasting economic boom is based on real savings and not on Fiat Money. Only Real Savings ensure the prices for goods and services are optimized.

"The Fed is in the most unusual position of providing vast amounts of cash to the banking system - to such an extent that, instead of holding reserves deposited by member banks, the Fed is now a huge supplier of funds to the banks! The fractional reserve banking system has been turned upside down!" 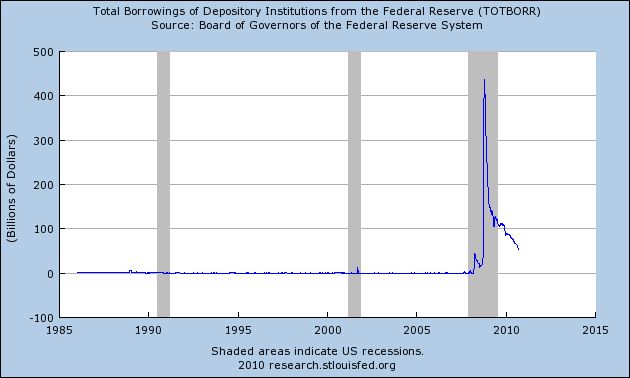 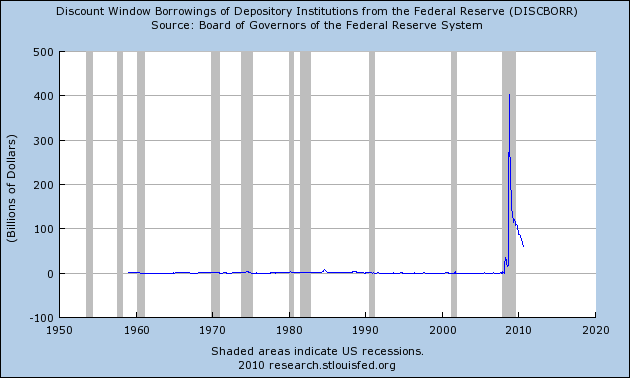 In an economy with fractional reserve banking, where commercial banks are guaranteed against failure by central banks and receive credit at below-market interest rates, the market restraints are replaced by opposite forces. This theory is exactly the opposite of the Keynesian monetary one which is followed by most modern economists and politicians.

The so created new money goes first to the government, then to government employees, subsidy-beneficiaries (war industry), and suppliers. They are the ones who benefit from inflation, to virtually else’s detriment. Private enterprises and savers are the ones most victimized. They pay the highest prices and are the most damaged by the false signals and distortions caused by inflation.

Artificially low-interest rates motivate businessmen to increase their investments; simultaneously, they discourage savings on the part of the public. And these savings are in fact badly needed for a sound economy and a healthy financial system. Additionally, financial (Banks) entrepreneurs manufacture newly leveraged (leverage works in two directions) financial products (CDO’s) to attract the investors. As long as the boom is in place, all goes well and the leverage improves the results. However, once the recession starts, the leverage works against the financial entrepreneurs (read Hedge funds and Bankers). We have a CREDIT CRUNCH.