Don't expect to see lower commodity prices soon! A cyclical top we probably shall have in 2045 or in 23 years from now.

What is happening now (2022), we forecasted in 2017-2018. As usual, most people did not pay attention to it or did not believe such would be possible.

The world hasn’t figured out yet that John Maynard Keynes’ policies are flawed and dangerous.

Commodities are in the next leg of their long-term bull market starting in 2009. The action will be a reaction to the 2008 crash that caused SUPPLY destruction.

Commodities such as oil, grains, precious metals, etc. had a great up leg in early 2008 and then had a brutal correction during the second half. Although much of it is attributed to deflation and “demand destruction”, these conditions are short-lived. Two basic reasons; shortages (supply destruction) and rising inflation. Since government policymakers will make every effort to avert an economic contraction, they will flood the economy with inflation and renewed government spending. Economic policy decision-makers at the federal level think that “increased consumption” is the key to economic growth because they are influenced by the Keynesian school of economics. The bottom line is that conditions are ripe for commodities to resume their bull market and reach new highs during 2009-2010. As an offshoot of this, you will also see conflicts across the globe tied to natural resources as countries with growing populations need more food, water, energy, etc.

In contrast to real estate, the supplies of foodstuffs never reached an excessive level, as stockpiles are at multi-decade lows. Very few consumers ever speculated in food, while “flipping” of real estate was common. Food-related ETFs didn’t even exist a few years ago, that’s how novel investing in food is. Although builders became very wealthy during the housing boom, farmers benefited very little until this year. Corn, wheat, soybeans, and rice sell for less on the Chicago Board of Trade than they did a year ago, while costs have jumped. Now that banks are reluctant to extend credit, the capital investment in agriculture will shrink to an unsustainably low level. Those are indications of a major market bottom, not a recently popped bubble.

Investors should treat such extreme conditions as opportunities rather than take the herd mentality and view them as disasters; historically the masses have always been on the wrong side of the equation and there is no reason to expect anything different this time either. 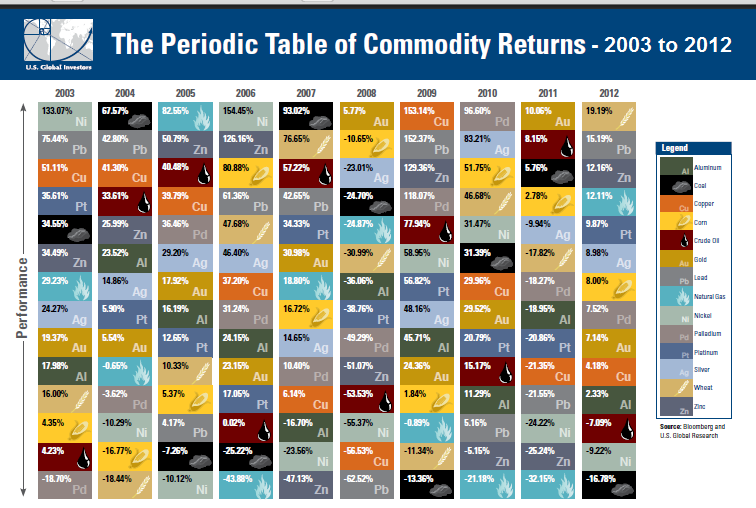 A Commodity Super Cycle has been in existence for over 100 years.

The top or peak of the first commodity “Super-Cycle” occurred in 1920. This was seven years after the Federal Reserve System was established. The tops occurred in 1920, 1950, and 1980, and the current cycle is on course to peak in 2010. From here on out the action should be fast and furious right up to the top. We know that the peak of the last gold bull market occurred in January 1980. That was the peak in Super-Cycle III. It appears that the current bull market in gold has a high probability of peaking with the 30 years Super-Cycle IV.  W. D. Gann

The last commodity bear market went on for 22 years, and only just ended 5+ years ago. We've spent much of the past 5 years simply regaining price levels that in some cases hit multi-decade lows. In the 1990s for example, humanity enjoyed prices on some commodities not seen for 30-40 years.

And in the last 5 years, commodities were hardly an investment theme the general public participated in. The public complained about commodity prices--they didn't invest in them. They preferred the Dotcoms, Financials, Industrials and Real Estate. No investments in Oil stocks, Copper stocks, Agricultural stocks, or Gold and Silver mines.  Recently the Institutional Investor has only started to observe the commodity market. Deutsche Bank as of August 4, 2008, has even called it a top.

Tell your banker you want to buy Gold and/or Silver and he will have to call Headquarters to save him out. Tell him you want to take physical delivery and you will see smoke come out of his ears. Since there is no "Volcker crunch" of 15-20% interest rates, it should be pitifully obvious, even to women, children, and the blind, that the gold and commodities bull will continue until interest rates rise above M3 money supply growth. Those calling for an end of the commodity boom make a terrible mistake. 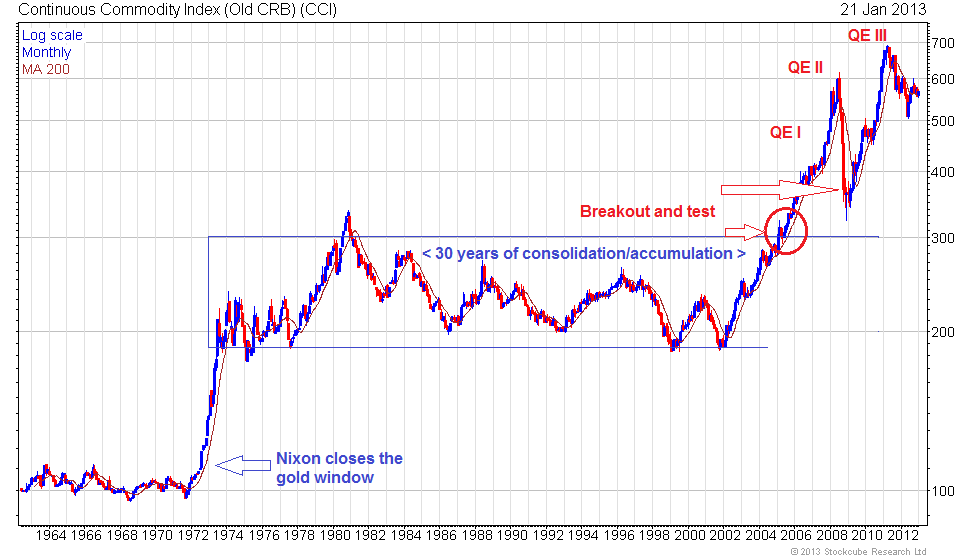 Deflation Scare is the Perfect Camouflage for a Hyperinflationary policy!

The deflation scare currently hovering over the entire market, particularly in the metals and commodities sectors, has been brutal. But important today is that this “scare” cannot and will not evolve into a genuine deflation.  What we have today is falling asset prices in, specifically, real estate, commodities, and stocks, and a rise in the value of the US dollar. This has led many to wrongfully conclude that we are not only experiencing a deflation scare but that a depression brought on by a deflationary collapse is imminent. The massive bail-out programs and government interventions result in MONETARY INFLATION which will lead us into a Hyperinflation cycle.

One of the easiest measures of whether fundamental or speculative forces are driving a market is to look at the spread between the 1st and 2nd-month contracts. If the commodity is in backwardation, (where the 1st month is at a premium to the 2nd) it is taken to indicate a short-term supply deficit. If the spread is in contango, as is normally the case, the size of the contango can give us some additional information.

If the spread is tight, and one would expect most contangos to be tight with interest rates so low, then the potential for an exogenous force being applied is reduced. However, if there is a widespread, and prices are moving upwards, it suggests that investors are buying longer-dated contracts, and in the process, pushing them to a premium over the front month. This may suggest tracking funds are becoming more active.