Updated February 5, 2020 - Bearish Flag for the Dow expressed in Gold - A crash and a solid down trend we have: resuming bear trend now!

The charts below speak and tell us that the Gold & Silver sector will perform BETTER than the traditional Stock markets will!

Charts (except China and Japan showing a fresh break down) all look similar and are extremely Bearish.

These PF-charts are the answer to an important question and show what the REALITY looks like!

One of the best ways to gain some perspective on stock markets and gold is to look at the Dow Jones Industrials (DJI)/Gold ratio. The Dow/Gold ratio has a long history as the 200-year chart above attests to. The ratio has had considerable movement over the years, which is an accomplishment in itself since gold was until August 1971 fixed first roughly at $20.67 and then at $35 in April 1933 when the Roosevelt administration revalued gold up in order to devalue the US$.

The devaluation of the US$ was a part of the currency wars of the 1930s.  The Roosevelt administration also forbid the hoarding of gold, gold bullion and gold certificates and gold was purchased by the US administration at the then fixed rate of $20.67. The resulting profit was used to fund the Exchange Stabilization Fund (ESF) a fund that was established by the Gold Reserve Act of 1934. One thing that stands out with the above chart is that following the creation of the Fed in 1913 the Dow/Gold ratio has become a lot more volatile. 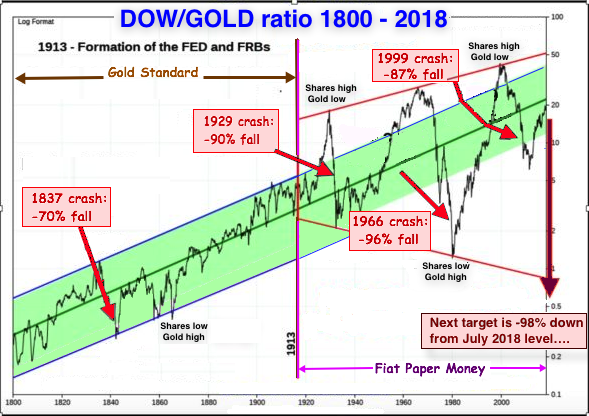 Copyright, All Rights Reserved - The contents of this report may NOT be copied, reproduced, or distributed without the explicit written consent of Goldonomic.

Another proof that the HERD has an extremely low IQ ! https://t.co/RJuOxzDsb4